We collocate a server in Switzerland (to show extreme distance) and repeatedly download images from it using an iOS Simulator in Cambridge, MA. In conducting downloads of a series of images, we find that fully encrypted Caffeine has 4.5x-8.5x greater throughput than HTTPS showing a just as great decrease in perceived network latency. We find Caffeine’s improvements over HTTPS to be consistent despite network congestion or otherwise adverse conditions (packet loss, lot of devices on the network, etc).

A webserver in Zurich, Switzerland contains twenty-four images of great achievement—from Edison’s 1877 cylinder phonograph to Musk’s SpaceX. These images total 1.615506MB. Smaller versions of these images are below. 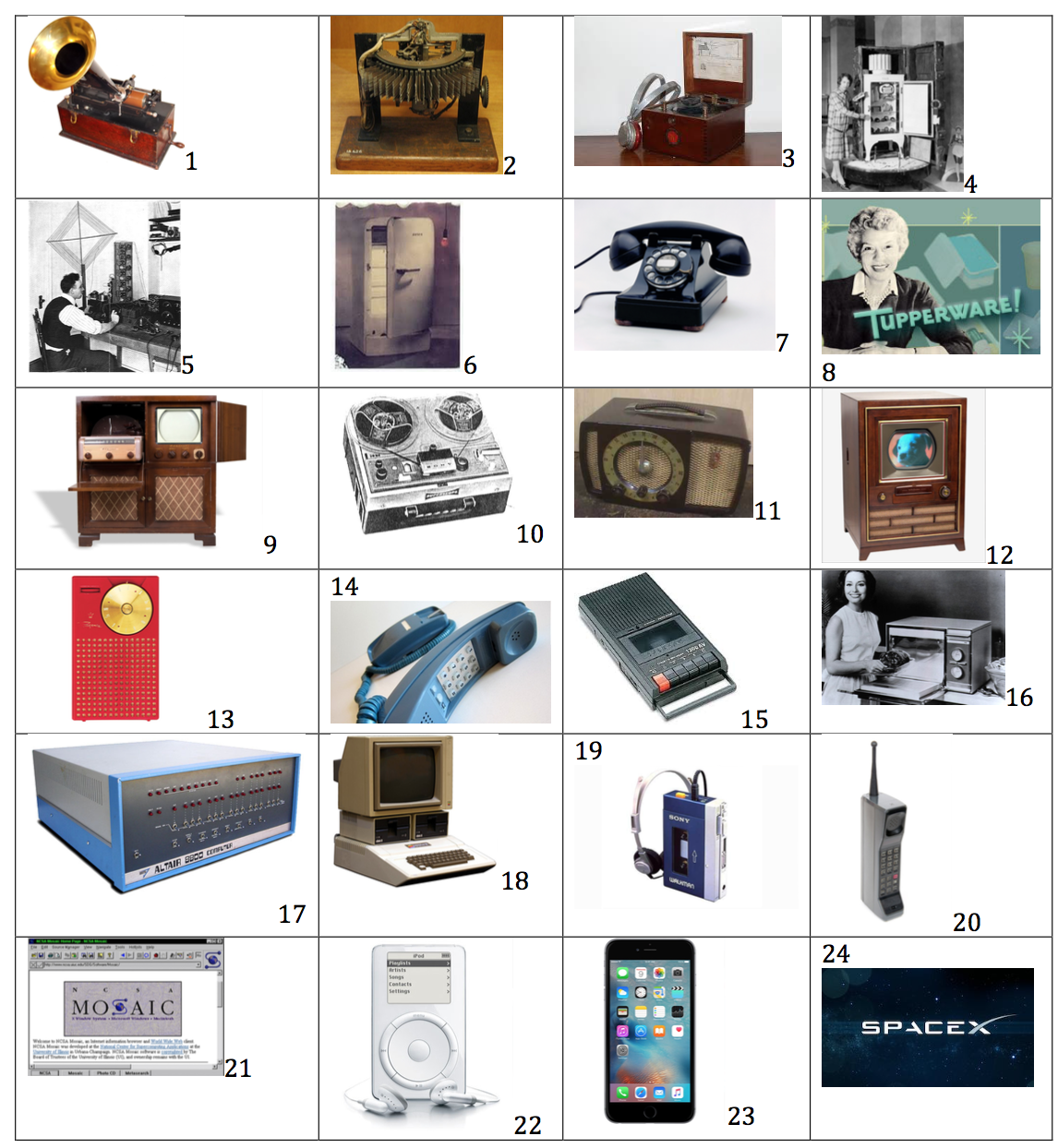 These twenty-four images are downloaded from the server in Switzerland to an iOS simulator in Cambridge, Massachusetts consecutively from oldest to newest (1 to 24). The sizes in bytes of each individual image are below.

To test HTTP/S downloads, we use the traditional NSURLSession provided by Apple’s Foundation Library. To test our alternative approach to mobile networking, we use Caffeine’s provided APIs.

In attempt to scientifically evaluate the difference between Caffeine and HTTPS as it pertains to images, we took the following steps. Note: All data was collected from within the same 100-meter radius including no other smartphones/laptops. All tests were run on the Harvard University secure WiFi. The results in this study may be more dramatic than if the client and server were in the same country (U.S. to U.S. connection, e.g.).

For every 10 sets (each with an additional 3 images) of trials (12 for Caffeine, 12 for HTTPS), we have the following results. 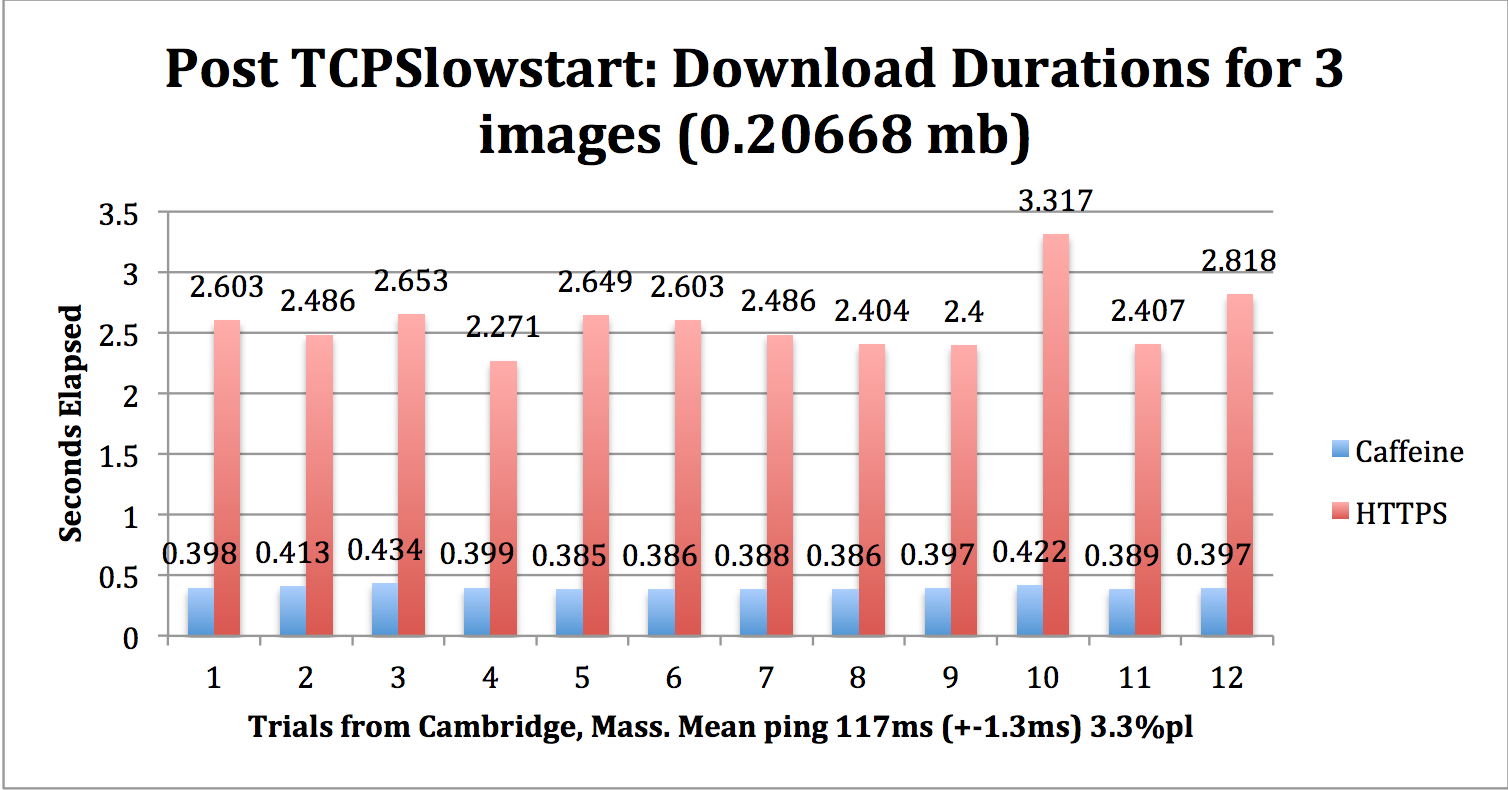 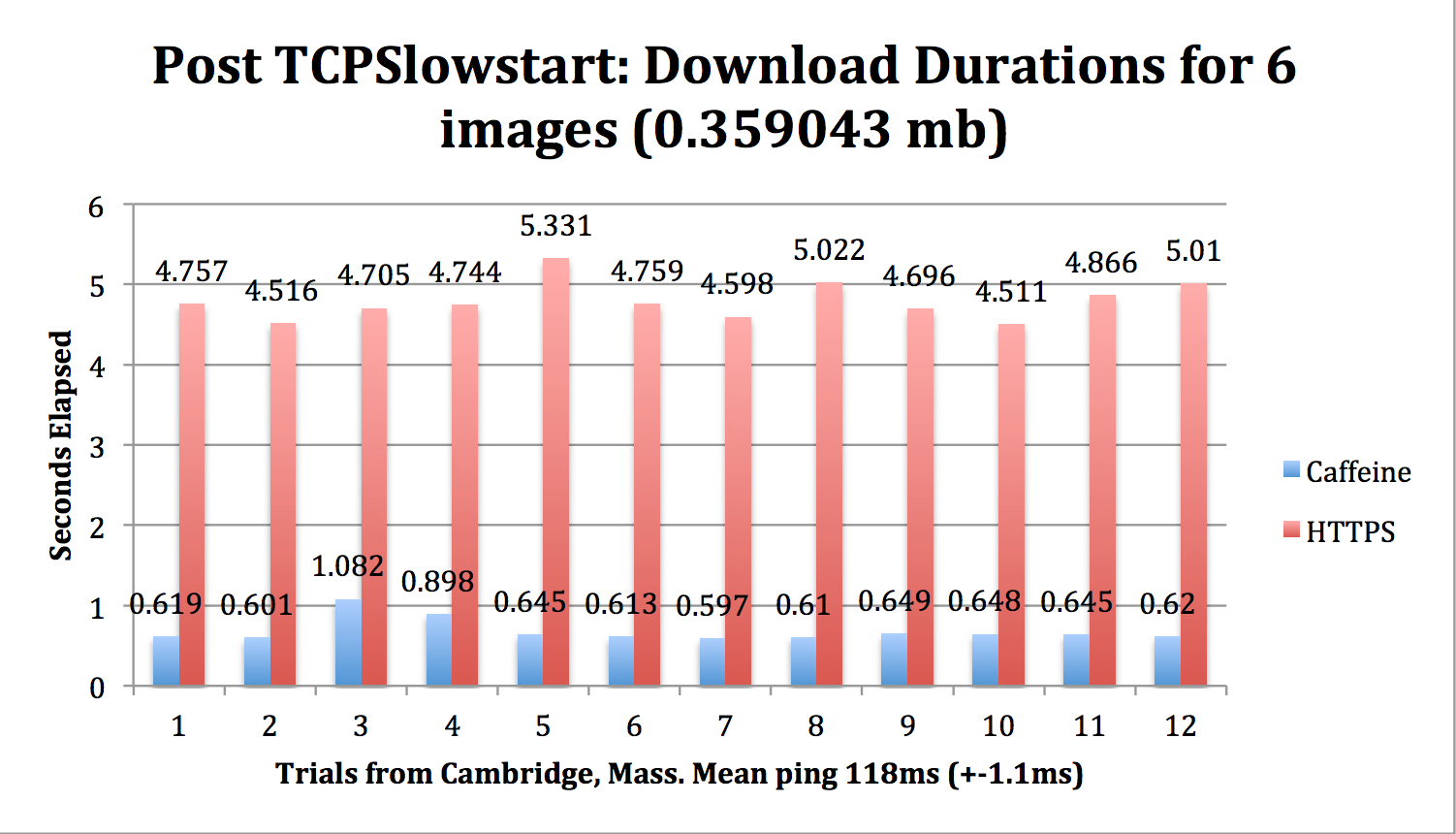 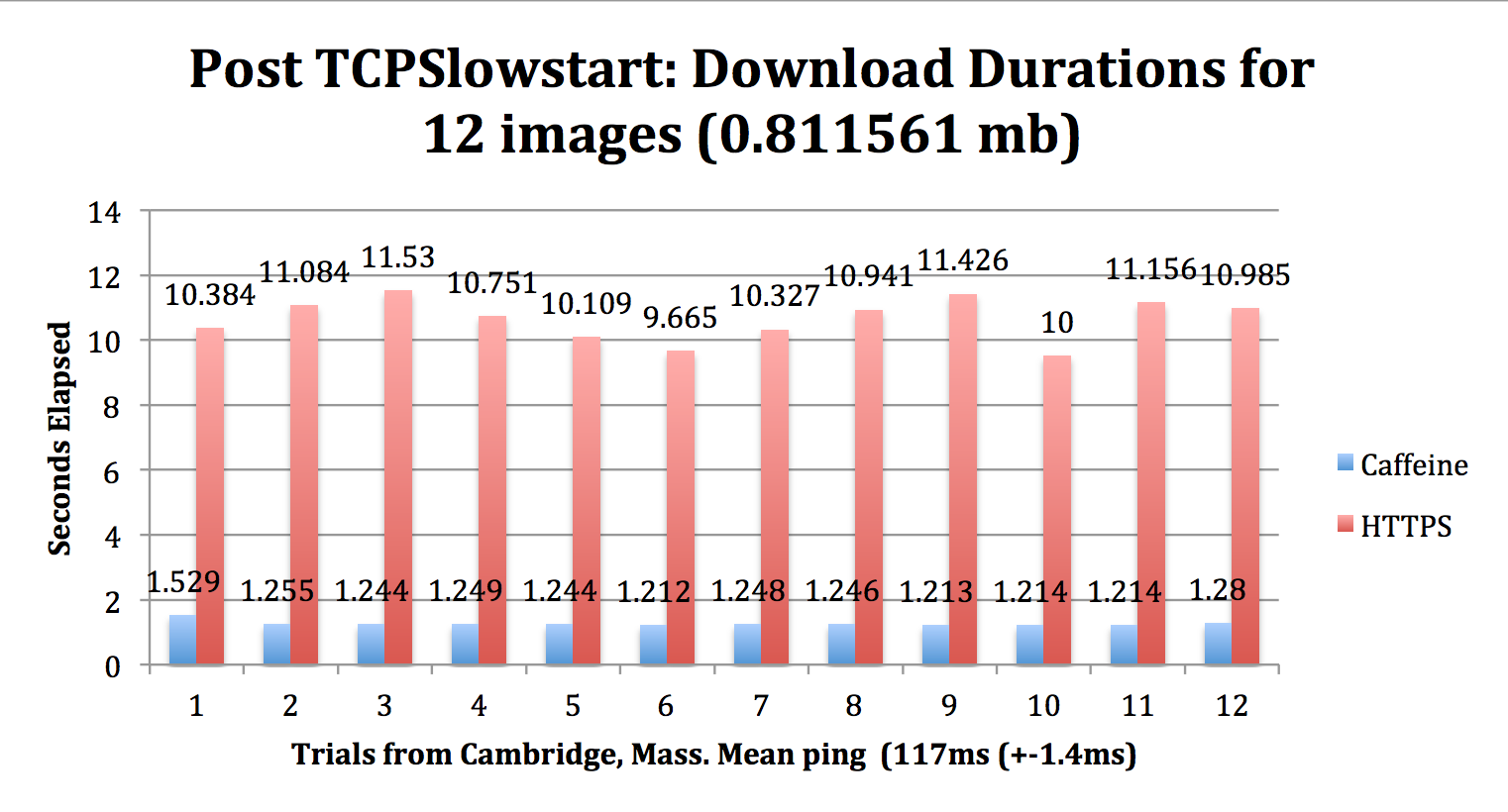 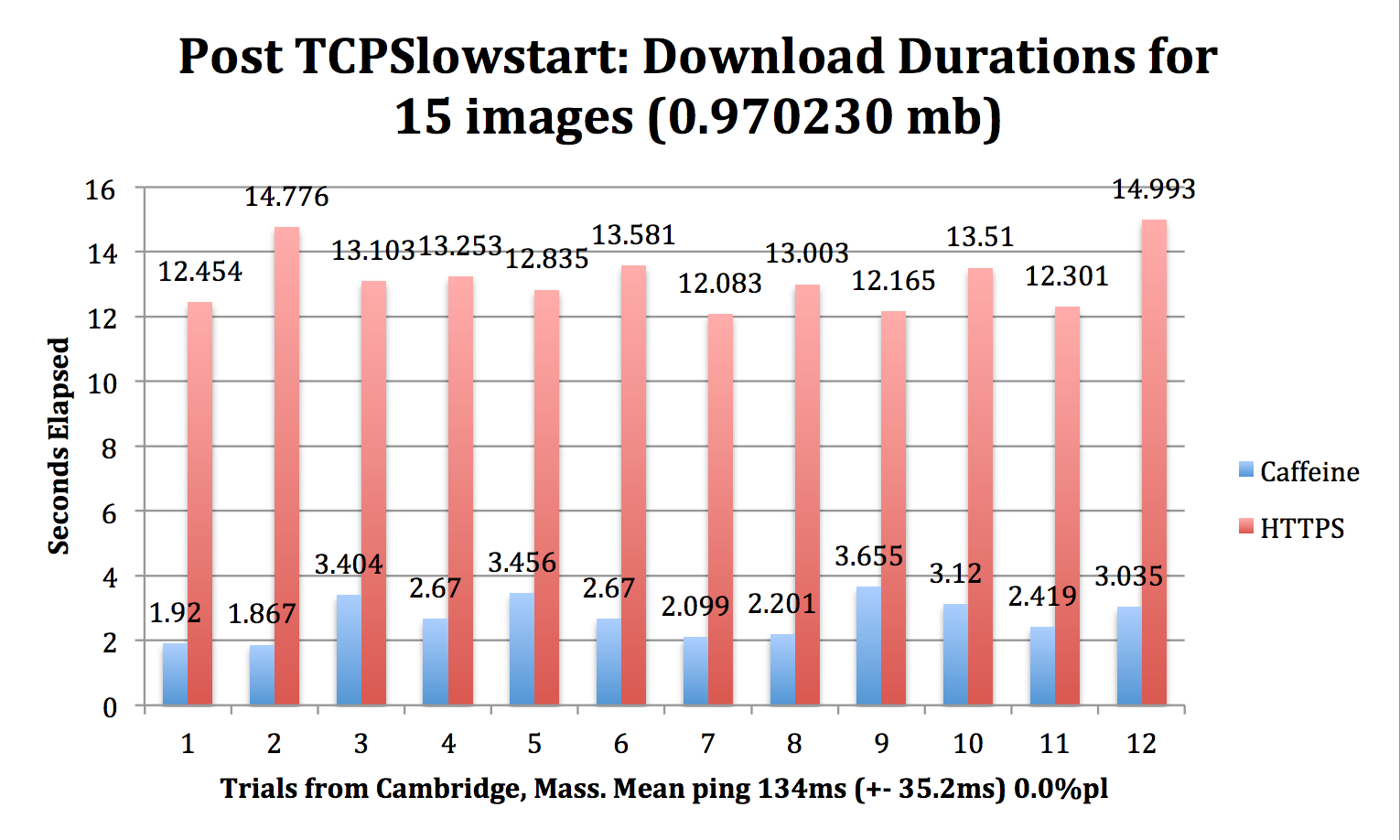 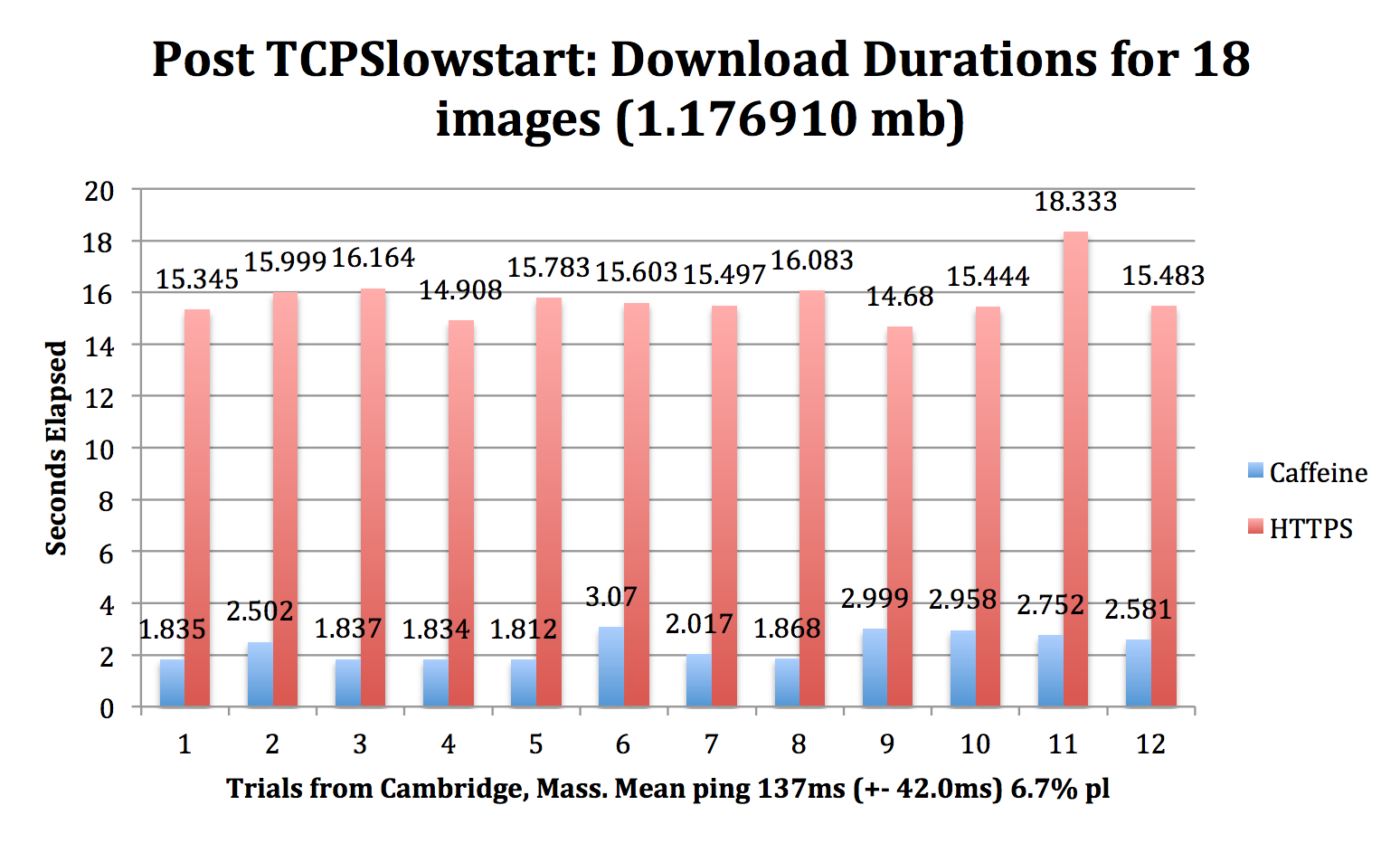 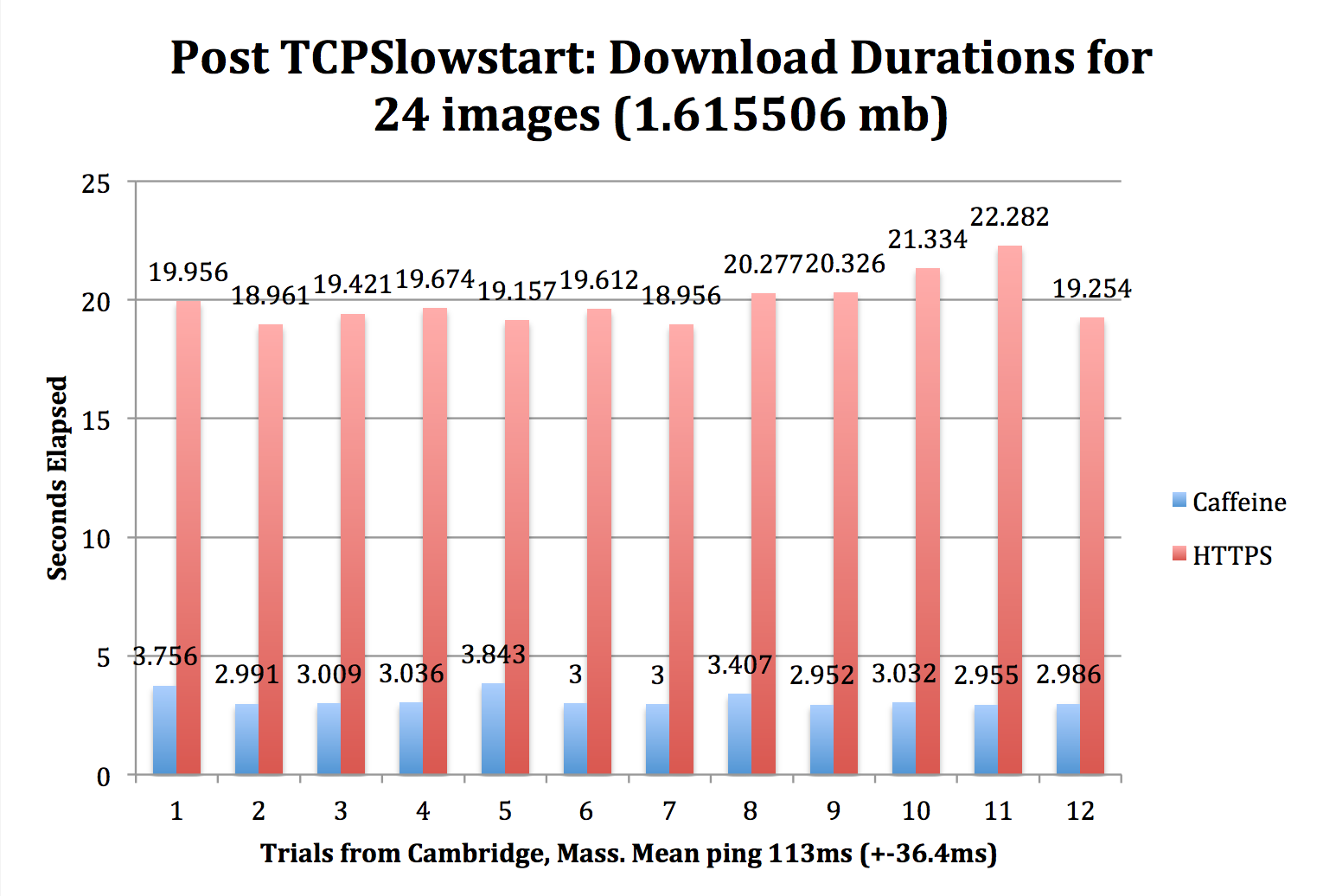 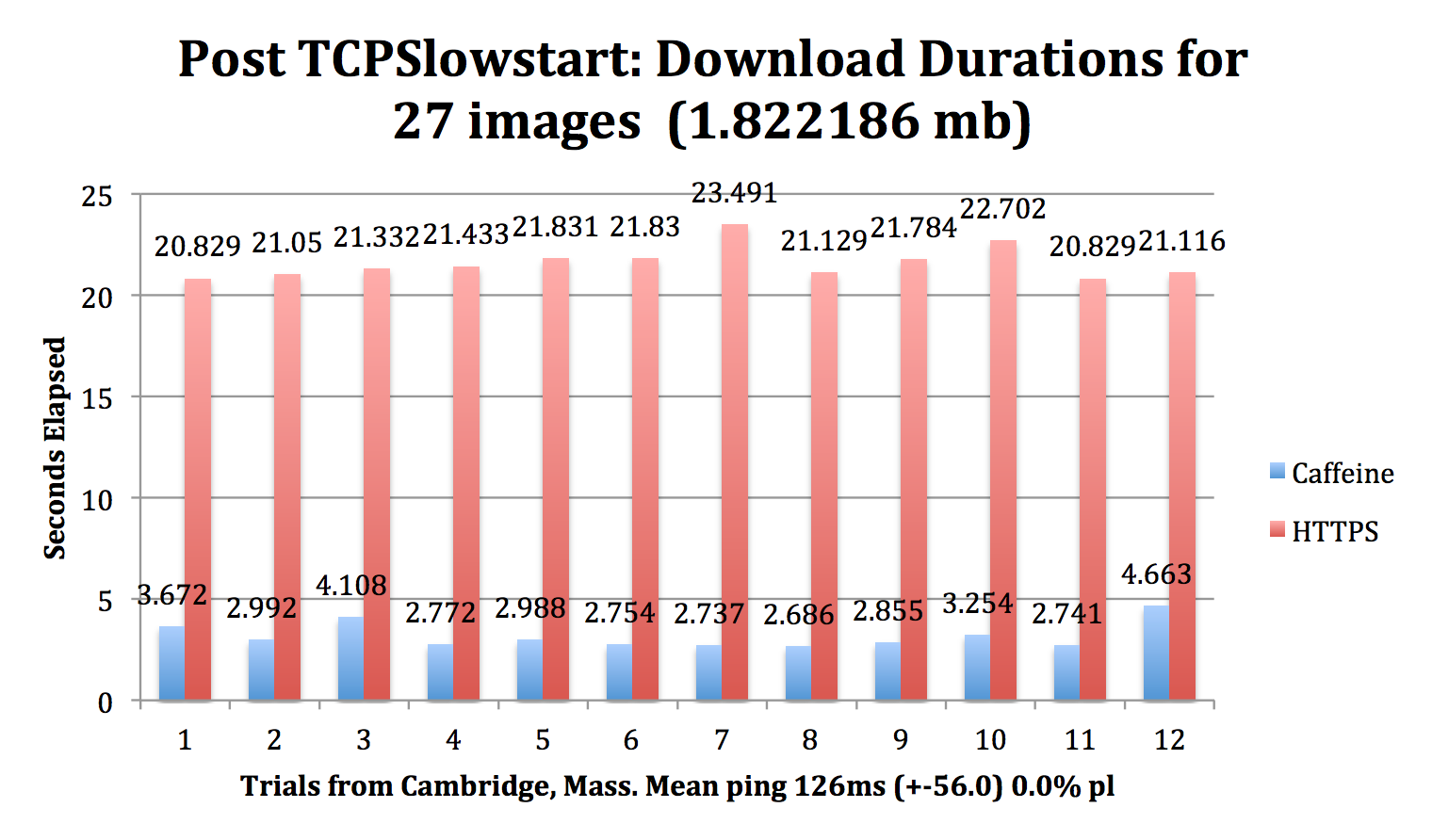 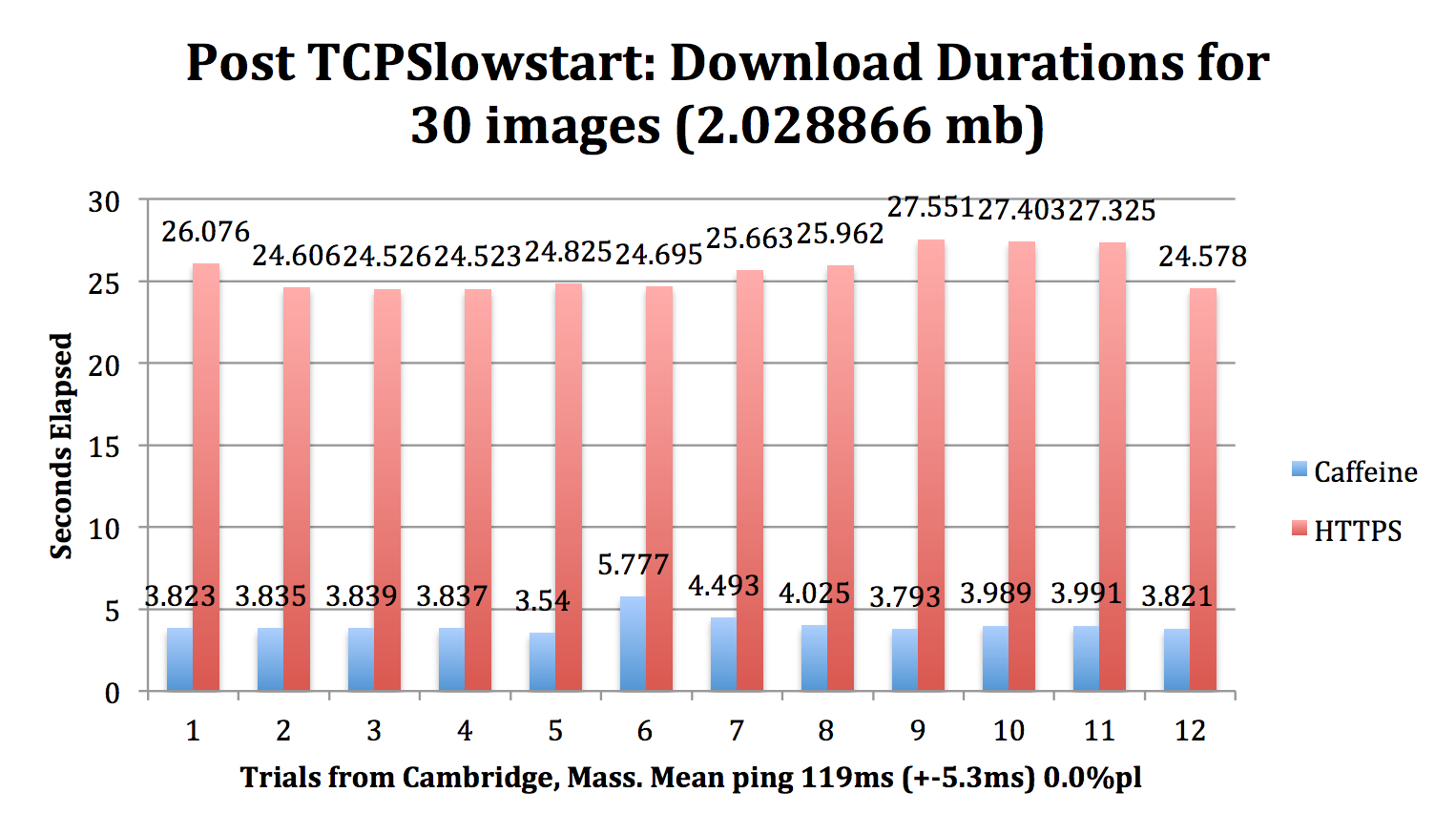 A cross-sectional look at the average results: 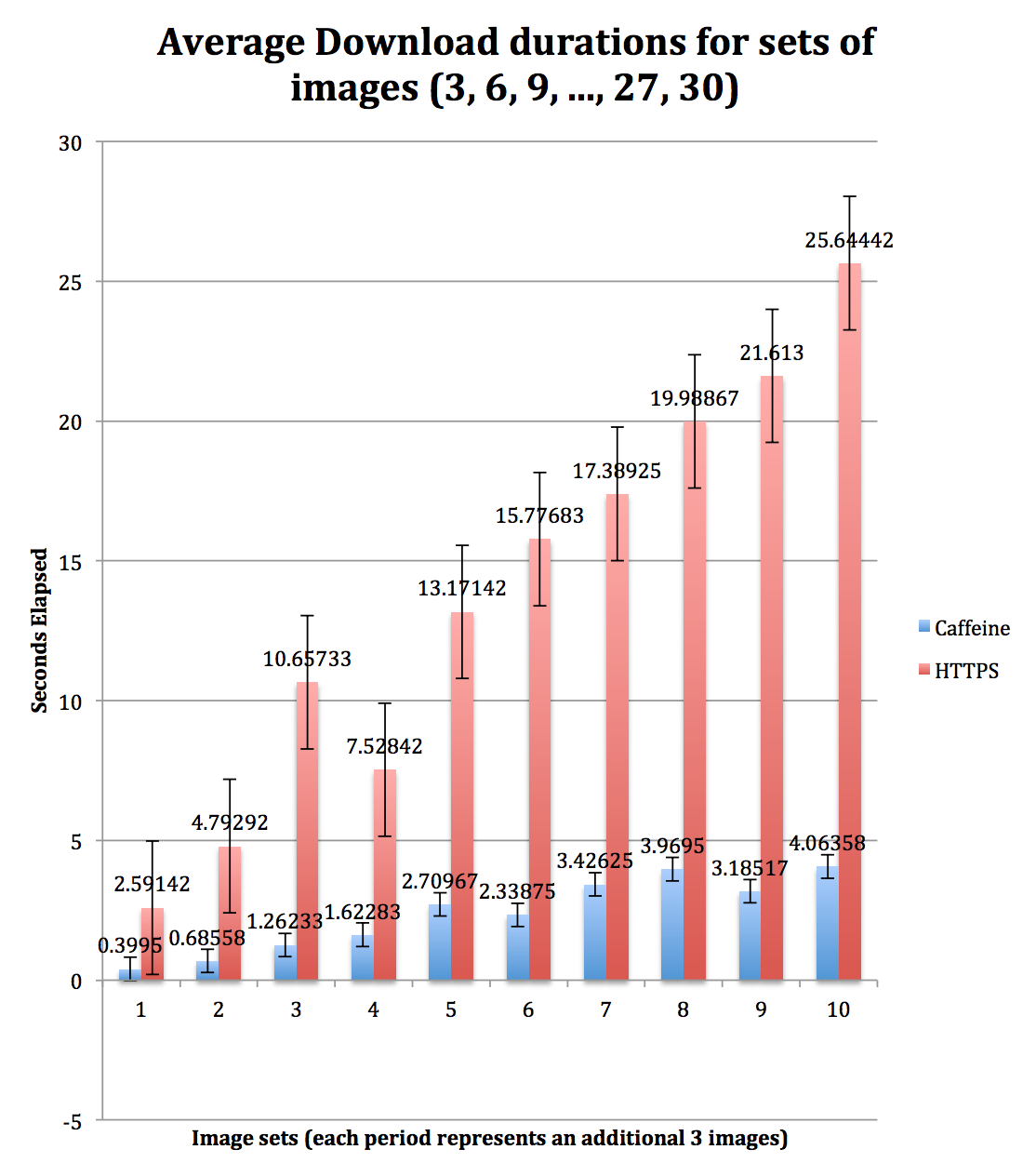 A cross-sectional look at the median results: 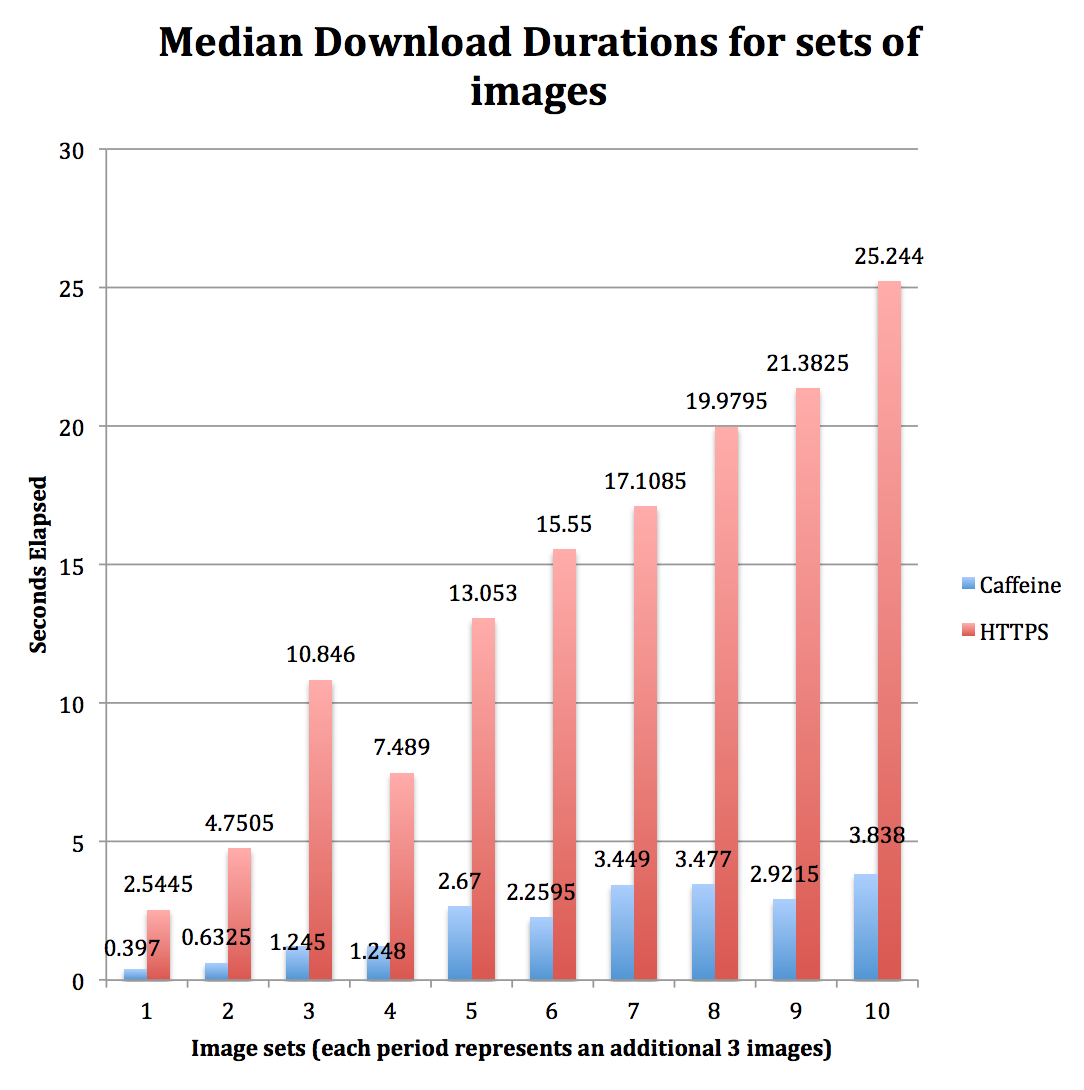 On average, Caffeine is anywhere from 400% - 850% faster than HTTPS. There are some anomalies in the data such as the 4th period in the median graph (above). This can be explained by waves of congestion on the network, or latency overseas. Across the board, the improvement gains of Caffeine over HTTPS remain relatively consistent.

To normalize this variation, we determine the average throughput (bytes/second). 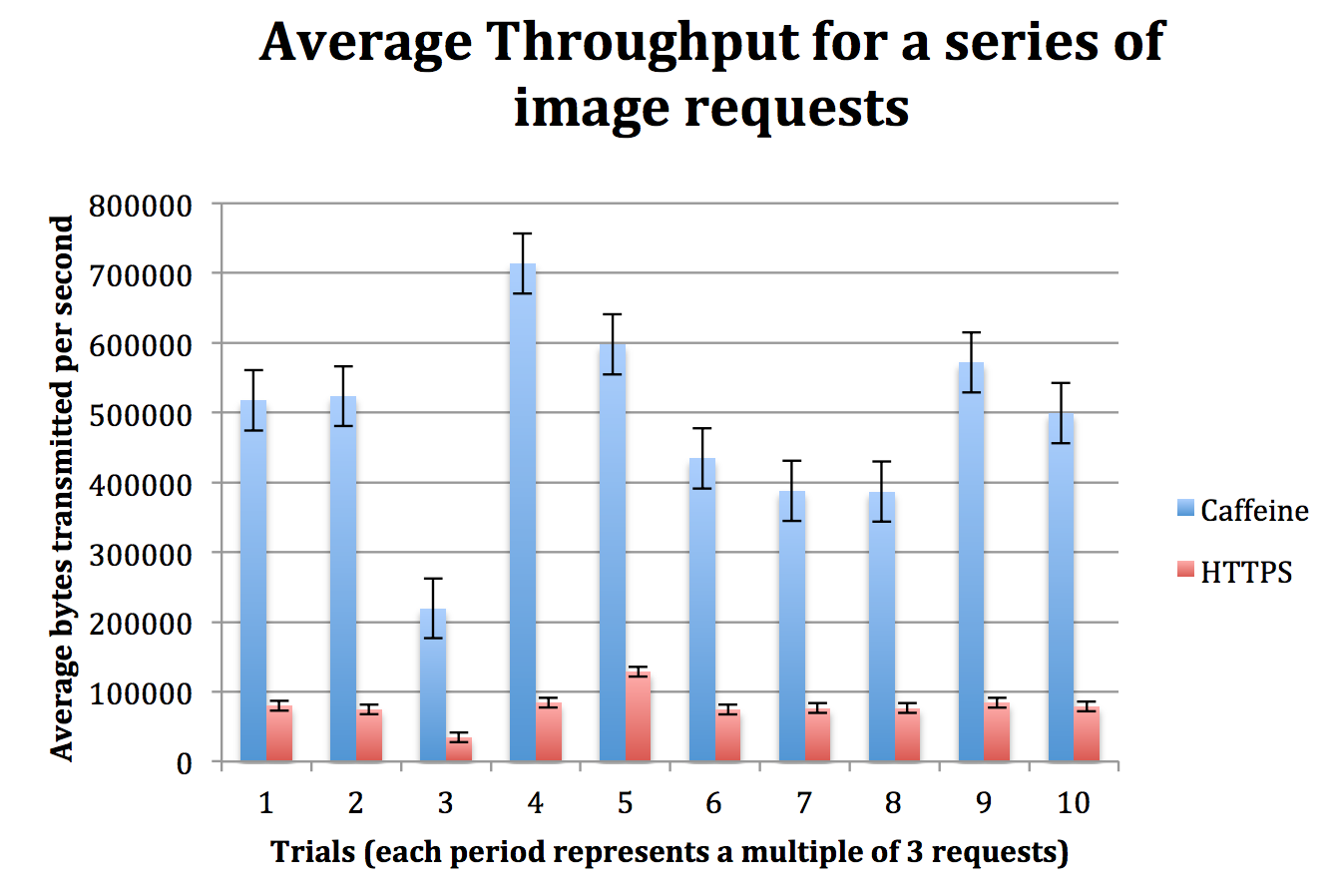 This graph much more clearly displays the difference of Caffeine. It describes how much data can “fit through the pipe” per second. On the X-axis, the total number of requests increases by 3 periodically.

The percentage gain of Caffeine versus HTTPS is shown by the graph below. 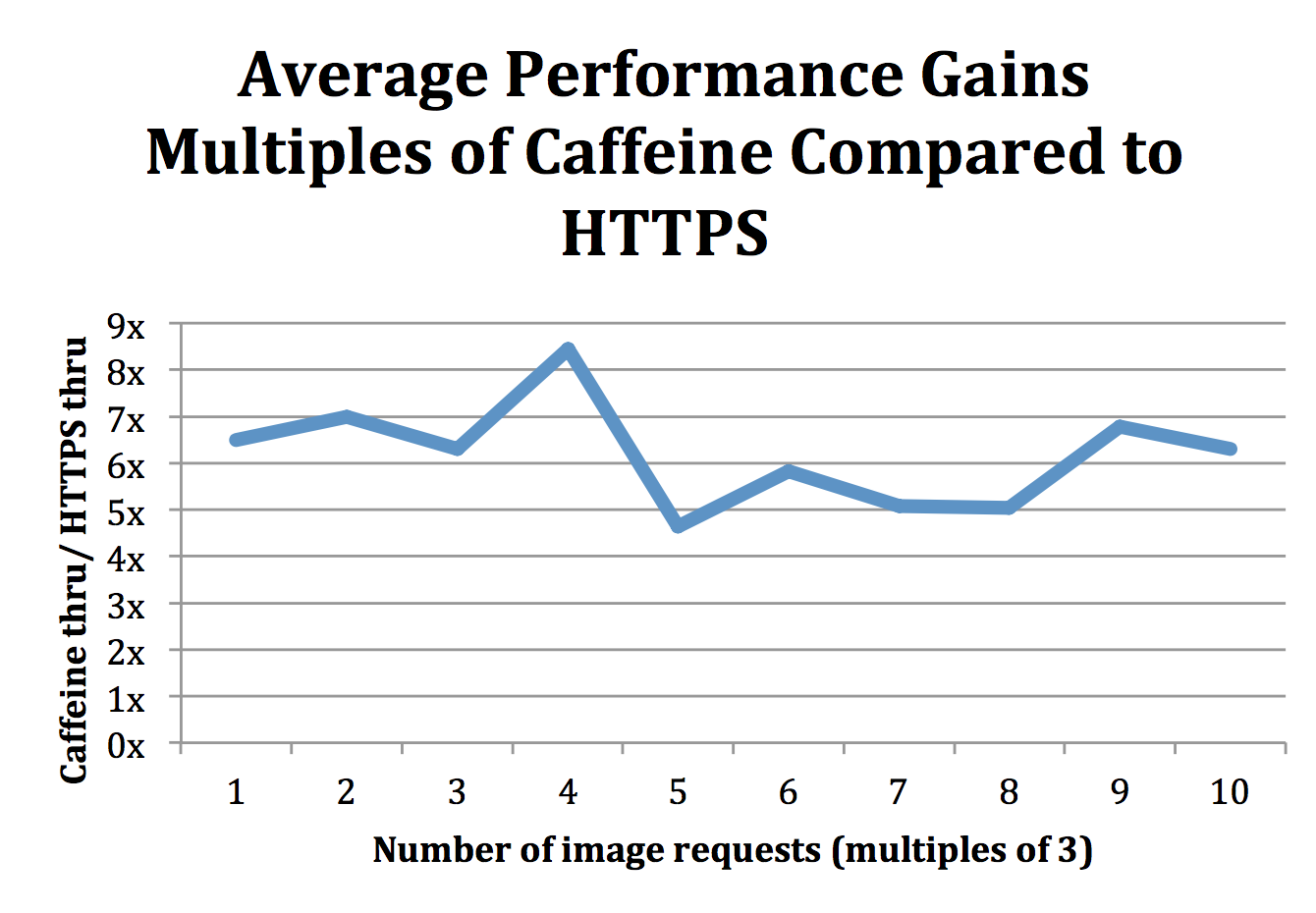 The minimum average multiplier improvement of Caffeine over HTTPS shown by this graph is ~450%, while the maximum is ~850%.

When developing Caffeine, we continually asked what is actually necessary for iOS application networking environments. This approach has resulted in the reduction of a lot of (what turn out to be) unnecessary features/data in HTTP. The amount of bloat and latency incipient to HTTP continue to surprise us quite a lot.

Forthcoming research include quantitative analyses of resource usage— determining how much bandwidth, CPU, battery-life would be saved in a Caffeinated environment.

Caffeine is the fastest way and most secure solution to send data in iOS request-response architectures.

Show me who is using Caffeine